Christmas Carol Countdown | No.6 – Mary, Did You Know? 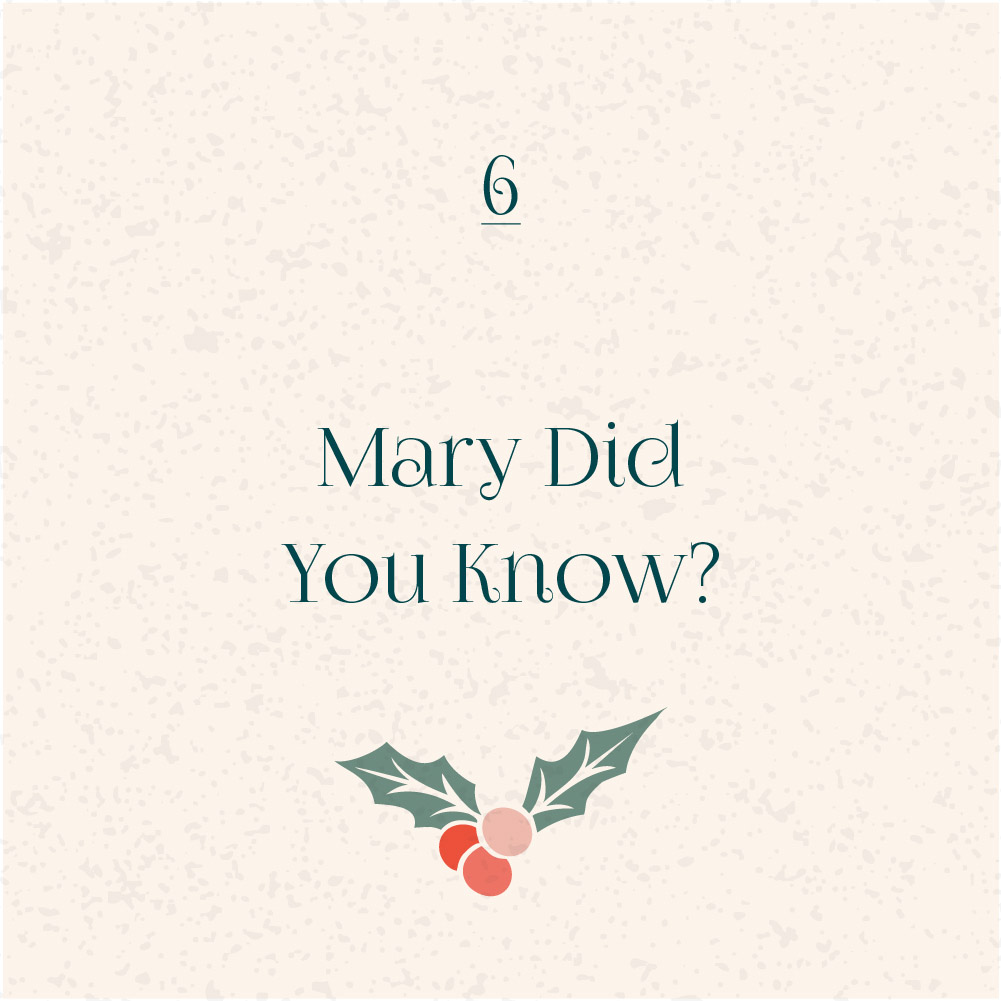 Today’s devotional is by Lucy McAllister.

"‘Mary, Did You Know?’ is a well-known Christmas song written by Mark Lowry in 1984. The song came to him while he was working on a Christmas program. He remembered a conversation he had with his mother about Jesus' birth, when she said, "If anyone on earth knew for sure that Jesus was virgin born - Mary knew!" Mark then spent the next seven years tweaking his lyrics and thinking about what he would have asked Mary if he had met her.
Mary knew that she would bear a son who would be named Jesus. She knew He would save people from their sins (Matthew 1:21) but did she know just how incredible and awesome His life would really be? After all, Mary was only human like us, and likely couldn’t even begin to imagine the life Jesus would lead, the people He would save, the miracles He would perform and the lives He would transform.
What I love about the lyrics of this song is that they remind me that, even though Jesus was truly human - a tiny, helpless baby - He was also truly God, the Great ‘I AM’. Who could tell a more amazing story than this? And we are written into that. Yes, Christmas reminds us of Christ’s coming… but that is just the beginning of this epic story.
We know how the story goes, we celebrate it every year. We study it, learn from it, it is part of our faith. If we are to answer the question this carol asks, many would say ‘Yes, Mary knew…’. However, if I met Mary, I would ask the same question as Mark Lowry, “Did you know?”
In the words of the author, “As my mind went back to the manger scene, I began to think about the power, authority and majesty she cradled in her arms. Those little lips were the same lips that had spoken the world into existence. All of those things were contained in the young child lying quietly in her arms. Even now, he was the very one who had given life to his mother, Mary.” Extraordinary!
During the Christmas season, we ponder the mystery of God becoming human. We marvel at the grace of God who came to save us, to make us new, to heal us, and to die for us, the perfect sacrifice for sin. This song reminds me of that, and shows us just a glimpse of how amazing God truly is."